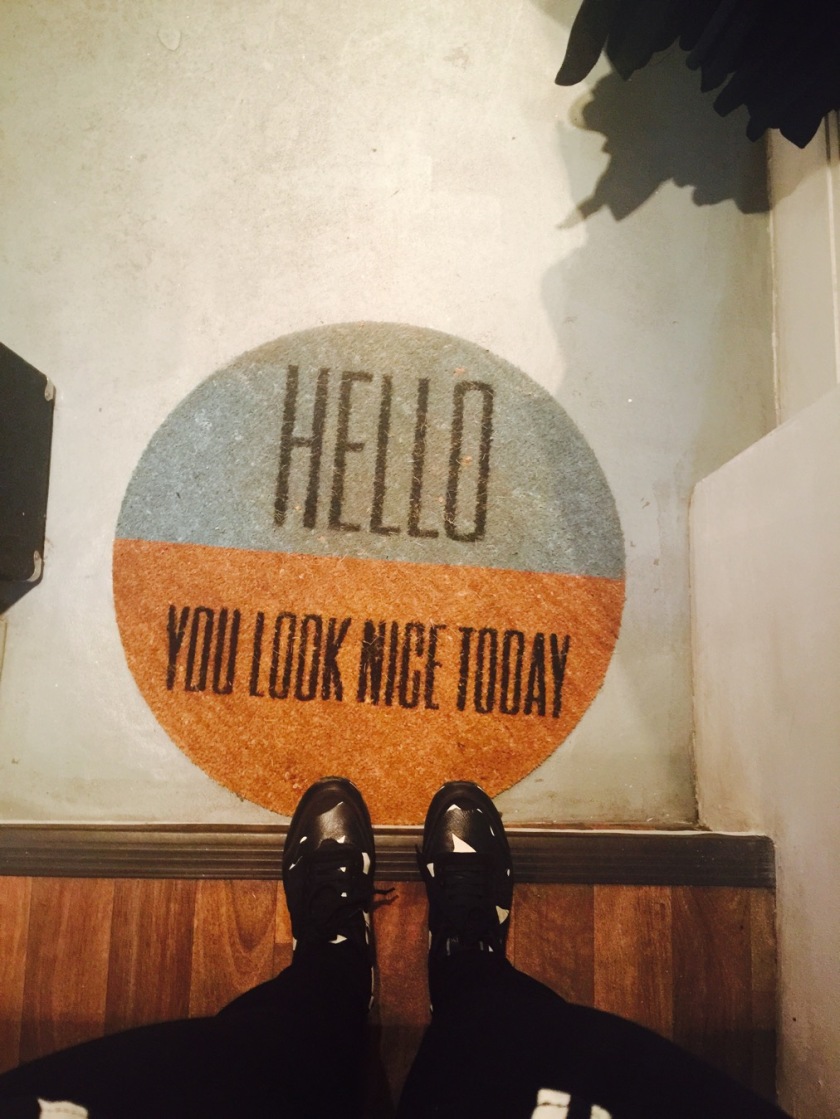 Today’s post will simple be about kind simple gestures the image above was in a store … this small note does wonder … never underestimate the echo of a simple sweet gesture.While the world is going crazy try to be the change you want to see , be an example to your family , siblings, friends, and society. Be who you want to be associated with don’t wait for change , change does not happen eventually unless you take up the determination to make it happen! Although it’s easy said than done.”Have courage and be kind” … remember Cinderella’s mother last words.. Believe that all hard work will pay off someday . Simply have FAITH.

Support and inspire each other with kind words , moves etc…

Each and everyone of us is here in this life for a purpose ,Know it and make sure to be kind while you attain it. success is  worth nothing if its not shared.

Love your fate and have faith in God and yourself and you sure will have it. again  remember patience is key 🙂

PS: if you are a Valentino Fan check out their Haute Couture S/S 2016. Just login to their website. I loved it! Enjoy!!

The “Liberty in Fashion” exhibition was a great source of inspiration for looking out and knowing a great heritage of the finest fabrics , textiles  and prints in the fashion world. Since Liberty celebrates its 140th anniversary as a company, it decided to showcase over 150 fabrics, products and textiles that represent Liberty’s strong identity relationship and collaborations. The most associated design to the brand was basically the paisley, floral and patterned prints and  vibrant colors. 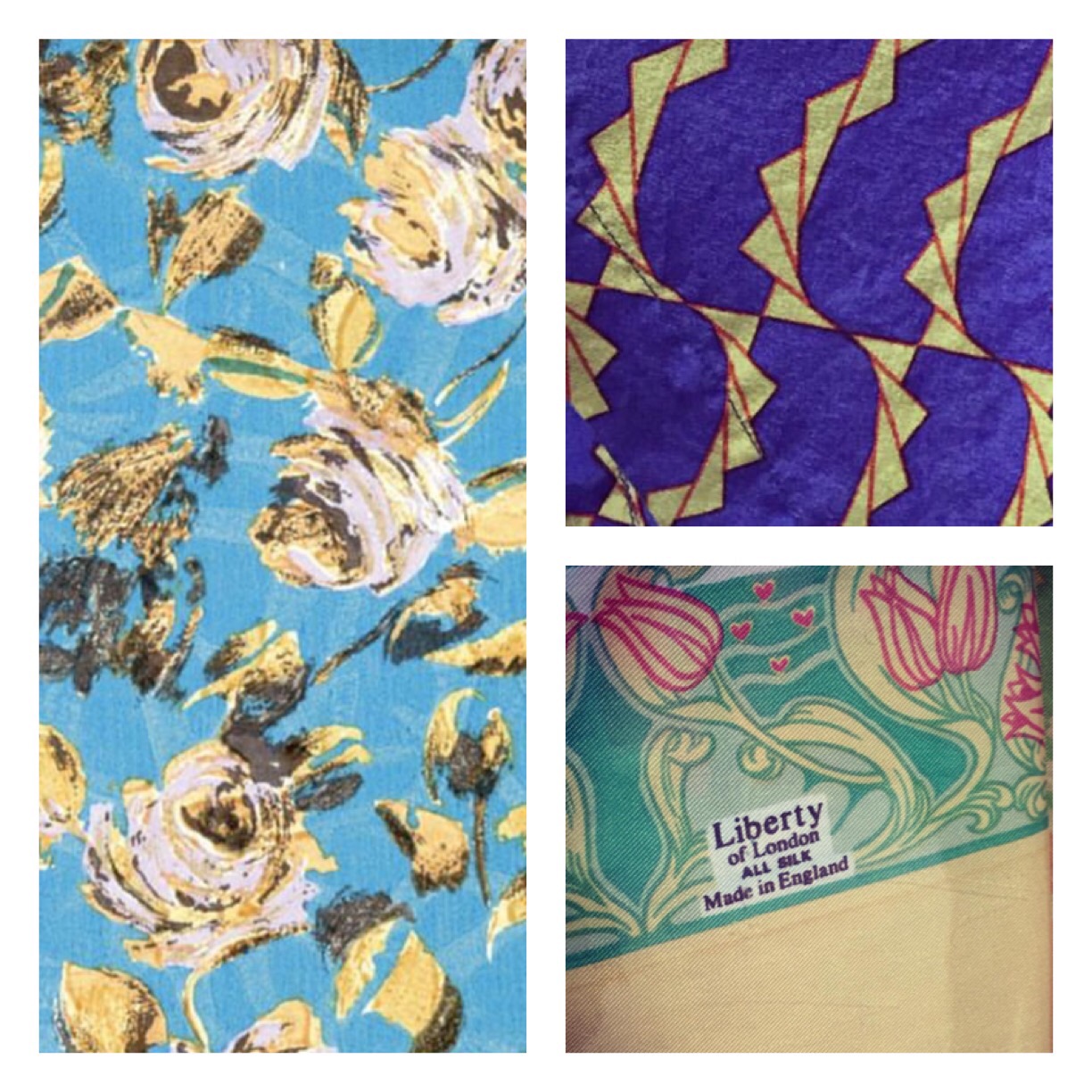 As I roam around the venue it made me feel as if I was in a fabric-land heaven, it had lots of amazing timeless fabrics and designs that are used till today. Liberty simply taught me that indeed “true style never dates”.Throughout the years Liberty has managed to keep up with the changing fashions and styles of the decade whilst keeping its trademark look and identity. This can be particularly seen through two displays in the exhibition, one for the 1960s and one for the 1970s. The bright designs of the 1960s used a lot of Liberty’s fabric. The contrast of the 1960s display can then be contrasted with the 1970s display where romantic  garments show the quest for nostalgia which the ’70s brought. A Dialogue with the East

This exhibition shows us that Liberty played a huge impact on the British fashion and its key trends from Aesthetic dress in the 19th century, through Art Nouveau in the early 20th century, and the reforming of these styles to the development of the now known “Liberty print” which made a lot of collabrations with Nike , The North Face and Trainerspotter . It simply invites you to know more of the inside world of this iconic department store history from oriental bazaar to a new evolved London shopping icon that every London tourist must see especially those interested in Vintage Fashion or fashion in general.  The exhibition is still on until 28th February, 2016 at the Fashion & Textile Museum in London. 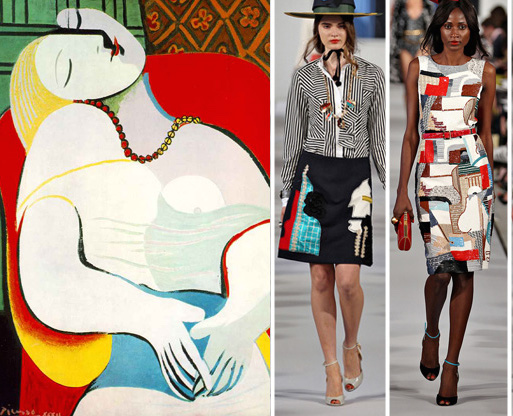 When we think of fashion, we all think of art, there’s a strong connection one can not ignore, in fact I think of designers as artists with a highly creative talent with just a simple garment they get to turn things out beautifully. However, to attain this they need to be inspired, history showed us that nearly most designers got their brainstorm from a certain art movement or piece for example in 1965 Piet Mondrian paintings become the reason behind the Yves saint Laurent “ iconic cocktail dress” collection design. 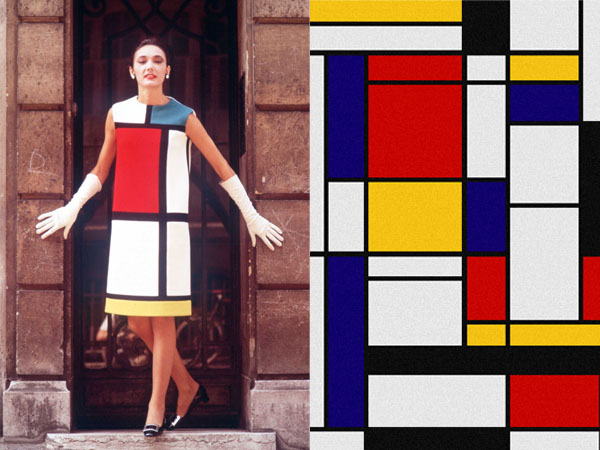 (Left)The Yves St Laurent dress was inspired by the abstract paintings (right) of the Dutch De Stijl artist Piet Mondrian It became known as the Mondrian Collection and was featured on the front of French Vogue in September 1965.

Oscar de La Renta (the founder) was known to be an outstanding talent , believed that everything bought inspiration from amazing woman he met ,to his roots, nature and travels. Born in the Dominican Republic 1932, as known to be a Spanish colonial going back 500 years in history, left school to study art in Madrid he then was trained by Cristobel Balenciaga. All his designs were so clear that he was so inspired by the Spanish Culture. His eye recognized every detail he was so influenced by the great history of Spain, from its flamenco gypsies to the provincial shepherds heavy wool capes, coats and eventually he would showcase his own exclusive signature in Paris. As quoted in his legendary world of stylebook he would recreate Andy Warhol flower paintings, turning them into a print for a day dress with slanted pockets and a soft draped neckline 1. The art paint done was an outcome of a photograph of several hibiscus flowers.

How can impressionism developed in the 19th century be translated into today’s fashion, its all about light ,color and breaking free from rules . In other means a direct message was told, and basically that was what Oscar was able to display in all his collections. His connection with impressionism was very clear by the way he designed his dresses at his earlier design stage and later on his career life where he created a feminine refined silhouettes, and soft ruffles. He just had something about layers of ruffles or petal like layers of silk flowers, he was so inspired by the beautiful nature of his hometown. He always designed delicate impressionist prints making his dresses a wearable art. Most of his dresses were either delicate in fabric or had this painterly floral prints ,fitted bodice with a peplum. How more feminine can a lady get while wearing his gowns . He refined the ladylike looks , he stayed loyal to his classical elegant theme .

Fashion today, is simply influenced by all forms of art, such as music, photography , painting, to a certain history era. Art is a way of life that we live and by the way we dress we can share a mutual message, that we are similar in mind, taste and lifestyle. I think that art today is a universal language that can connect people together from all around the globe ,fashion is a piece of art that designers created from a simple fabric to a stunning piece of admiration that we see on catwalks. Fashion shows that we attend now are more exciting and thrilling than ever before simply because designers are getting creative even on how they showcase their collection believing in the say “ presentation is everything”. Karl Lagerfeld for an example used his Spring /Summer 2015 fashion show in Paris to make a political statement. He acknowledged the feminism and peace issue and bought it to stage , while showcasing his collection that woman have equal rights to men.

Finally, since most fashion shows are hosted in museums and galleries this proves that art and fashion are inseparable they complete each other in every aspect. Together they create a fun vibe and attract a lot of attention to the collection and brand. Fashion today truly plays a vital role in an economy and its society so let’s hope those amazing designers continue to grant us with more glamour and creativity.

How many fashion shows you attended took your breath away where the whole collection is stunning , but yet wearable? Very few, however, when it comes to the the prominent Fashion designer Oscar de la Renta its an “exception”. He was known to be giving woman power by dressing them with his regal designs. As a designer, he had an eye and taste for what women are after; he believed they should feel feminine, comfy and chic all in the same time. In the 1960s his turning point was when he dressed Jacqueline Kennedy the first lady at that time, and by then in 1965 The Oscar de La Renta House was founded.

The Dominican Republic born Fashion designer lived in Spain and Europe for a long time, which seems to show so much in his dresses creation and choice of garments, very soft and classic. He had so much pride to his hometown once stated “My great strength is knowing who I am and where I come from”- my island. In his early years of design in the 1960s,De la Renta used unique color, fabric and embellishment which made his collection so popular in that period and remained iconic to this day. He often referred to his tropical background and vibrant color of the island as a source of inspiration for his unique designs. 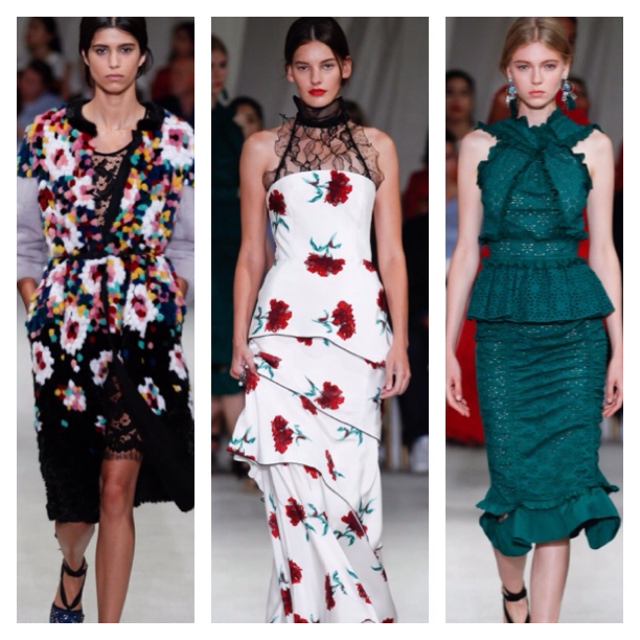 In October of 2014 Peter Copping Joined the Oscar’s Fashion House as creative Director. He proved to share common design traits as the Co. founder where he included 3D embellishment, ruffles (inspired of flamenco dress) and feminine waist cut.

Elegance, outgoing, and old style glamour is exactly what springs to mind the moment I got to watch the Spring/Summer 16 runway show which took place in New-York there was something impeccable about the collection. During an interview Copping stated he was searching for modernism whilst have a hint of history for the upcoming Season. A cultural heritage has been truly embraced in this collection, which showed classical Spanish signature , that he thought would be a kind tribute to the founder, such as implementing lively colors (vibrant crimson) ,flamenco dresses, lace , tulle , vibrant jewel ,and studded espadrilles. The brand seems to stay true to its identity, rich heritage and its all time reference which was Traditional Spanish costume. This made the designer grow in design but in the same time implement a new era gesture of “casual chic” to the fashion house.

I personally loved the whole collection , and thought that Copping did a great job by taking the house fashion line to another level of young ,and contemporary while conveying a deep reference point of the fashion house by designing delicate garments with a Spanish romantic twist. He involved the need of nowadays woman lifestyle by adding a bit of ecstasy, where an innovative wider young generation will be captivated , thus style will start to evolve with time further than what we predict in the fashion world.

Summer is here , so here is a sweet reminder to drink water as much as you can , it’s quite hot in our region lack of water intake may cause you real dehydration and dry skin. Be kind to yourself and avoid sun exposure mid-day! and keep Sun Block mode on